This week on the Xamarin Podcast, Mike James and I cover the latest and greatest additions in Xamarin.Forms that helps make it easy to bring native controls and functionality to your apps, including native view declaration and platform-specifics. Subscribe or Download Today Knowing the latest in .NET, C#, and Xamarin is easier than ever with […]

The tool lets you connect your mobile application to a device or simulator and record interactions with your app. The recorded interactions can then be fine-tuned and output as C# test cases. Those test cases can be saved for reuse in your own UI test automation projects or uploaded directly to Xamarin Test Cloud.

There are some general articles on recording tests using the test recorder, but I didn’t see any with specific instructions for setting things up for iPhone on a mac. This is my attempt at closing that gap. Hope this helps you too!

Here’s a basic getting started and requirements article from Xamarin.

Required: Pay close attention to the device provisioning instructions. In order to test your app on an iOS device, your app must have a development provisioning profile configured for the specific device in your Apple Developer portal.

For this post, I’m going to target a very specific version of the Xamarin Test Recorder. Because this tool is still in Preview, I want to make sure that I’m explicit.

To download the test recorder, visit the getting started link, then click the Weekly Build link along the right side panel.

After downloading the installer and installing the app, you may be prompted to download the latest Weekly Build.

Important Note: Continue only if you’re being asked to install version 0.13.0 or greater. Device support for iPhone doesn’t appear to exist in earlier builds.

You can confirm the version you have installed by checking the About Test Recorder menu. 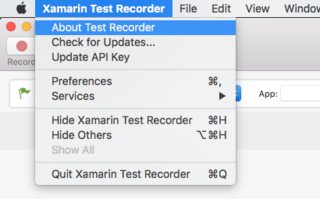 This is the version I’m running for this post.

If your version doesn’t match what I have, you can check for updates. 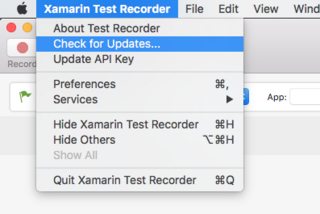 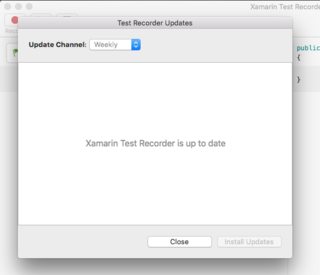 There are some preferences that can be set. 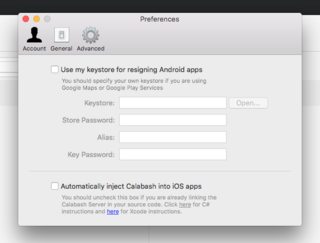 See the Xamarin developer documentation on Recording a Test for detailed steps with screenshots.

I’m going to embed a little in case you see this too (ICYSTT) section to this post. I was plagued with problems when I tried to get started; almost to the point that I assumed there was a bug that I wouldn’t be able to work around.

A colleague had a similar problem when attemping to run UITests against an iOS simulator. The “fix” mentioned in the forum helped her, and ended up helping me too. Basically, delete the {tempdir}/xdb/ directory ( /var/folders/7k/msfhh81j6hv3xdr09h1122hh0000gn/t/xdb/) then try again.

Xamarin also has a link for some Known Issues.

Hope this helps you guys! Leave comments below. I’d like to hear about the things you’re testing. We launched The Xamarin Show on Channel 9 this past September to provide content for both novice and advanced Xamarin users. Today, we’re excited to showcase the latest that The Xamarin Show has to offer in the form of Snack Packs! A Snack Pack is a bite-sized episode that’s covers a specific topic in just […]

Michael Ridland: Be more awesome with MFractor for Xamarin Studio

In this video I interview Matthew Robbins the creator of MFractor a Xamarin Studio Plugin. If you’re not using MFractor your really missing out, it’s got some beautiful features which save you truckloads of time when building apps with Xamarin Studio. If you’ve ever wanted a ReSharper for Xamarin Studio this is it. It’s got static analysis, code generation and […]

The post Be more awesome with MFractor for Xamarin Studio appeared first on Michael Ridland.